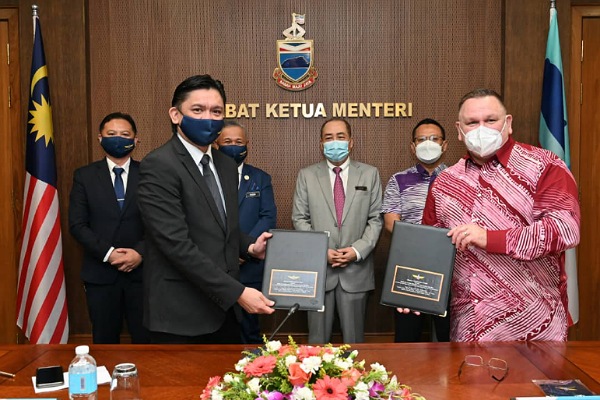 KOTA KINABALU (Dec 8): Sabah Air Aviation Sdn Bhd, a Sabah Ministry of Finance-owned aviation company, has embarked on setting up the State’s first ever fully integrated Cargo Terminal Operations (CTO), a project expected to jump start the state’s economy. The proposed CTO, once fully operational, will be a technologically advanced logistics hub envisioned to manage general cargo, perishable cargo and e-commerce. Besides serving Sabah’s requirements, the CTO will be designed to manage the entire Borneo Island’s air freight requirements in a seamless manner, assisted by contemporary technologies available in the market.

The proposed programme is a long-term venture between Sabah Air Aviation Sdn Bhd and POS Malaysia, the largest logistics and postal company in the country. POS Malaysia is in turn one of the key component companies under the DRB-HICOM Group, a conglomerate under the Al-Bukhary Group. Sabah Air Aviation and POS Malaysia intend to combine their strength and decades of experience in their respective field of excellence to bring this project to Sabah. It is anticipated that this project will help to jump start the economy of the state, and further integrate it with the BIMP-EAGA region. The project will act as one of the key economic growth accelerators for the state’s economy, as it emerges from the global pandemic. Sabah’s geo-strategic location will also be advantageous for the proposed CTO to become a preferred gateway between the Borneo Island and economic power houses in North Asia, such as China, South Korea, and Japan, according to Sabah Air Aviation chairman Kenny Chua.

Based on an exhaustive deliberation over the last year or so, both companies have decided to sign a Memorandum of Intent (MoI), on Wednesday which was witnessed by the Chief Minister of Sabah, Datuk Seri Panglima Hajiji Noor. The MoI will enable both companies to conduct in-depth studies, analysis, and derive various key parameters to ensure the project is commercially viable and relevant in the long term, keeping in mind the ever changing trends in the air freight market space, globally, as well as within the region. This intensive joint exercise is expected to be completed within the next three months, after which the findings will be presented to the respective stakeholders of both companies, for the final decision on the said matter, and subsequent implementation of the project. The CTO will be jointly managed by the two companies, and will be welcoming all air cargo players in the state, country and from abroad. The core mission of the CTO is to ensure sustainable growth in the said sector, while ensuring a level playing field for all stakeholders of the industry. Chua said KKIA Terminal 2 is currently under-utilized, and hence is prime to be repurposed into the proposed CTO. The promoters will be working with the relevant government authorities to ensure the CTO is awarded a Free Trade Zone (FTZ) status, he said adding, “This will be a key factor to ensure the growth of the e-commerce industry in Sabah, and the rest of the region. Chua also added that upon the formalization of the MoI, Sabah Air Aviation and POS Malaysia, in collaboration with the State Government will also be entering into detailed discussions with strategic stakeholders such as Malaysia Airports Holding Berhad (MAHB), Civil Aviation Authority of Malaysia (CAAM), Malaysian Aviation Commission (MAVCOM), relevant divisions within the Ministry of Transport (MoT), Ministry of International Trade and Industries (MITI), and all other relevant authorities and ministries. This, he said, is to ensure the relevant approvals are processed and obtained, to further this project.

Pos Malaysia Group Chief Executive Officer Charles Brewer said that Sabah is poised to become a major e-commerce hub in the region as the state is strategically located in the heart of Southeast Asia. Pos Malaysia is committed to achieve this aspiration together with the state of Sabah, through the sharing of the Group’s expertise and experience of over 200 years in serving the nation. Brewer added that this will provide many benefits to more than 1.7 million SMEs and MSMEs across Malaysia, by connecting businesses with customers within the region via the proposed CTO as the gateway to key cities in Asia. This project, once implemented, is anticipated to create approximately 560 direct jobs and 2,500 plus indirect jobs in the local market, furthering the value addition to Sabah’s economy. The project is strategically designed to be in concurrence with Sabah Maju Jaya roadmap promoted by the Sabah Government, for the betterment of Sabahans, as a society, and the rest of the BIMP-EAGA Region as a whole.